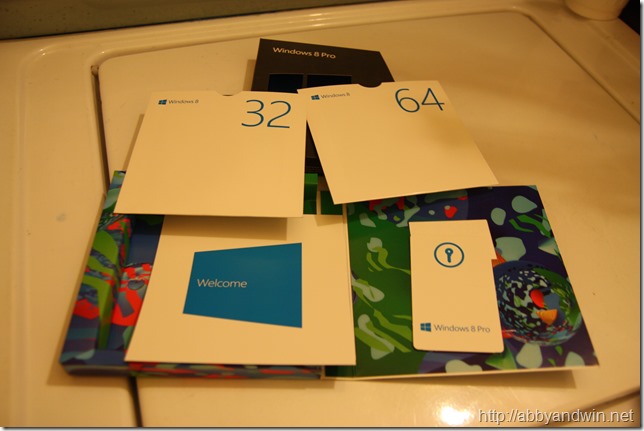 Windows 8 is here and Microsoft is offering multiple editions (again). I never thought I would be one of those who would buy the wrong version on accident but this time around I ended up making the mistake. Maybe this is why Microsoft releases so many different versions. Why can’t they be like Apple when they release OSX, there’s just the regular version (that covers new installations and upgrades) and the Server version. Very easy to distinguish between the two.

So the plan is to remove my RAID0 SSD (2x Kingston 120GB SSD). I decided to get rid of the RAID0 after I found out that RAID0 trim support can only be found in 7-series motherboards. I decided to get one Sandisk Extreme 240GB SSD drive. I was able to get it for only $120 a few months ago and it has been sitting around waiting for me to use it.

I’ll take the blame for getting the wrong version from Newegg. I guess I just didn’t notice that the title didn’t have “Pro”. All I kept trying to look for is the full version and not upgrade. The best deal I found was the Best Buy one – for $70 – but the there is no clear way to tell whether or not it’s the full version or upgrade. The Newegg disc is what I used to install since it clearly says “Full”. I planned on returning the other copy at Best Buy. After installation and registering, I was trying to install the free Pro Pack but was unable to. After an hour of trying to figure it out, I checked the System Properties and did not see “Pro” in the Windows version. I double checked the box and it was the same thing.

I ended up re-installing with the Best Buy box and was able to install it as a full version. It’s weird the URL I posted above links to the product but it now says “upgrade” yet I was able to install it without any version of Windows on my hard drive. Anyways, it comes with both 32 and 64bit discs. Now I’m up and running and Metro is going to take some time to get use to.

I have a RAID10 and 2 other hard drives installed on my PC. I was trying to format one of non-RAID HDD but it wouldn’t let me in Windows. So I booted off of the Windows 7 DVD and formatted it that way. I didn’t continue the installation after I formatted the HDD. I made…

Last night I got a BSOD with an error called DPC_Watchdog_Violation. I searched for it and many claim it might have something to do with my SSD and its firmware being old. I’m running a SanDisk Extreme SDSSDX240GG25 with firmware R112. Apparently it’s an old version so I decided to update it. I installed the…

At work we use iMacs for workstations but Windows for servers. There are some nuisance when sending files from OS X to Windows. Filename lengths, network connections, hidden files – just to name a few. In OS X, there are hidden files that start with ._ which become visible when viewed in Windows. It’s usually…

Microsoft has finally released Windows 10 on July 29, 2015. I took part in the tech preview and was impressed by how the new operating system looked and felt. Even though I was running the beta for several months on a VM, I was excited that the final release is finally available for download for current Windows 7 and 8 users. That excitement however, quickly turned into frustration.

I’ve trying out the demo for FoxIt’s PhantomPDF software. I was able to install the trial version 5.4x. Today, I tried to use it and an update popped up. I told it to update it and I get the following error. I Googled the error and didn’t find anything. I tried to right-click on the…

Check out this video http://www.freesmug.org/video/vista/TheRealVista1.mov. The audio was taking from a Windows Vista preview show, I’m guessing. With a possible 1GB memory requirement on the upcoming OS, why not just get a Mac? Well that’s a whole different conversation. Just thought I’d share since I found it funny. Oh by the way, one of the…